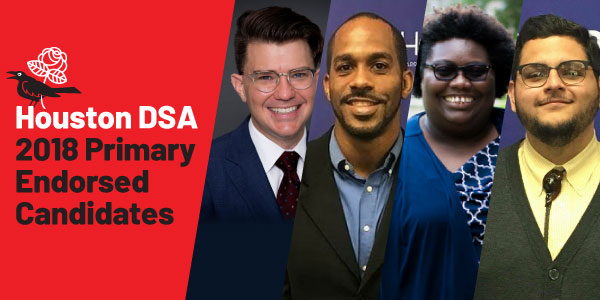 “These candidates represent the highest ideals of our organization: a commitment to fighting for social and economic equality, building democracy, and empowering working people in our institutions, workplaces, and communities.” said Amy Zachmeyer, Houston DSA co-chair. “We can’t wait to work alongside these campaigns to spread our values and build a better world for all the people in the Houston area.”

Franklin Bynum has been a criminal defense lawyer in Houston for the past nine years, handling cases at trial and on appeal. He is a former Harris County Public Defender, has never been a prosecutor, and frequently speaks on how to advise immigrants in criminal court. He has seen the Harris County Criminal Court’s problems firsthand: mass incarceration of the poor, coercion of guilty pleas, waste, and disorganization. Franklin’s campaign aims to end pre-trial detention and excessive court appearances, and combat the plea mill that is the Harris County Criminal Courts. Franklin is a member of Houston DSA.

Danyahel (Danny) Norris is an attorney, educator, instructor of legal research at Thurgood Marshall School of Law, and former president of the Houston Lawyers Association. Danny understands that education is the foundation of a just, healthy, democratic society, and believes that everyone should have access to education as a right, regardless of generational and structural barriers. The HCDE has a unique ability to level inequality between school districts, offering the services necessary to give every student an opportunity to succeed. Danny is a member of Houston DSA.

Fran Watson is an attorney, longtime community activist, and former president of the Houston GLBT Political Caucus. She has experienced firsthand the devastating effects the intersecting forces of poverty, discrimination and oppression have on people’s lives. Fran is a tireless advocate for the people of Texas, and is running to get Texas’ government working for the people again, by expanding Medicaid, fully funding our schools and early childhood education, raising the minimum wage, and ensuring equitable treatment for all, regardless of skin color, economic class, sexual orientation, or gender expression.

Ali Khorasani is a chemist with an engineering background who became active in politics during Texas Republicans’ attack on reproductive rights in 2013. If elected, Ali would be younger than any sitting member of Congress, recognizing an urgent need for radical action on climate change, Medicare for All, Black Lives Matter, reproductive rights, labor rights, infrastructure, and more. Ali’s campaign has activated volunteers from all over the district to reach out to disengaged voters and grow support for a society that protects our planet and provides for all. Ali is a member of Houston DSA.

We’re the Houston local of the Democratic Socialists of America, the largest socialist organization in the country. We fight for more democratic control of our politics, workplaces, and communities. Our members build and support progressive movements for social change while establishing an openly socialist presence in U.S. communities and politics through activism, political education, and community organizing.